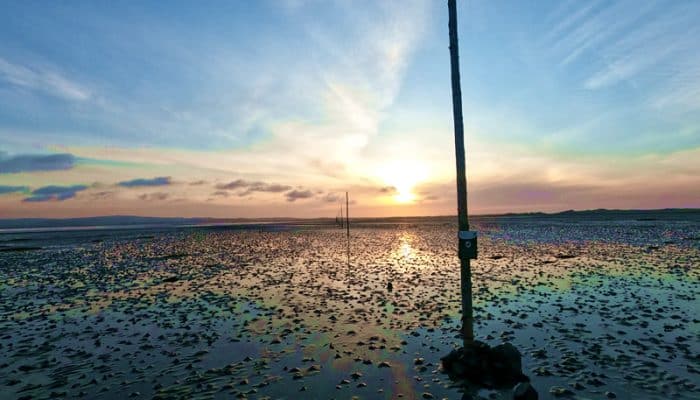 The Holy Island of Lindisfarne is the convergence point for several long distance walking routes, that have also served as spiritual pilgrimages over the centuries. As an avid walker myself, I have created the following summaries of three routes that offer spectacular views, hills and the sea. They all end with the Pilgrim’s Way to Lindisfarne, an ancient walk across the sands that can only be accomplished at low tide. The three long distance walks are:

A 62-mile walk ( 4 – 6 days) that follows an ancient pilgrimage route followed by St Cuthbert and many other monks from Melrose Abby in the Scottish Borders to the Holy Island of Lindisfarne in north Northumberland. This is the shortest of the routes I cover in my articles, and the most popular among pilgrims and walkers, who are often keen to spend a couple of nights enjoying the breathtaking Holy Island.

A 97-mile walk (6-8 days) linking sites associated with St Oswald, a 7th century king of Northumbria, who had close ties with the monastic community on Holy Island. The route follows the stunning Northumberland Coastline, before heading inland along the river Coquet and the charming town of Rothbury before heading south to Heavenfield. Along the way It links with the famous Hadrian’s Wall walk, and ends here on Holy Island.

The Forth to Farne Way

A 72-mile walk (5-7 days) that follows an ancient pilgrimage route starting in North Berwick in East Lothian (Scotland) and ending on Holy Island. The route has links to early Celtic saints, including Cuthbert, Aidan and Baldred, and follows the stunning Berwickshire coast and visits locations including Coldingham and St. Abbs, Dunbar and Berwick-upon-Tweed.

Whichever of these routes you decide to walk, make sure you are familiar with our advice on how to cross the causeway to Holy Island safely at the end of the route, which can only be done on the receding tide. This site provides lots of information about Holy Island and how to get to it safely.