Weather on Holy Island (Lindisfarne): when is the best time to visit? 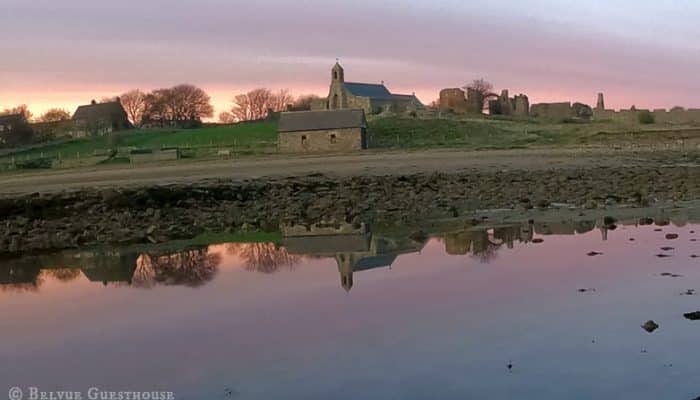 What’s Holy Island’s weather like and which season should I plan my visit for?

We get this question a lot, and from experience (and recorded averages) we can give you some guidance, but please be aware that the weather on Holy Island is changeable, so do expect the unexpected.

Holy Island has its own micro-climate, so it’s not uncommon for it to be sunny on the island and for it to rain only a few miles away on the mainland. Despite being in the North of England, average rainfall here is not hugely different from the South of England (a little higher), though average temperatures are about 3 °C lower on average than London. Averages don’t tell the whole story though, and summers can be very pleasant. At the time of writing (May 2020), it’s 23 °C outside and sunny, and we just might take the barbecue out for the weekend.

The main piece of weather to pay attention to here is the wind. Because Holy Island is in the North Sea, when the gusts come in, you can really feel them. In our first year here, a part of our garage roof blew off, took off, and was never found (it probably made it to Norway). High winds up to 50 mph are common in winter, and also occasionally make an appearance in spring and autumn. They’re not all bad though. There’s nothing quite like standing on a beach and watching the waves gather and crash during a storm.

Snow is not common, but we do get it from time to time. The latest serious snow event here was the ‘Beast from the East’ in 2018 that saw Holy Island cut off from the mainland for about a week. After the causeway was cleared, it got blocked again because of ‘icebergs’ that landed on the road during the tide. It was a cold time, but absolutely spectacular. We were almost down to our emergency tins of Tesco ravioli.

There’s nothing like a graph to confuse things, so here’s one below. A truer summary is: winters are cold and sometimes windy, though you do get bright sunny days. Summers can be lovely and sunny, with a variety of temperatures (and occasional rain), but are overall quite nice.

When is the best time of year to visit Holy Island?

April to September are the best months for a visit, if nicer temperatures and (a chance of) less rain and wind is your preference. The tourists flock to the beaches, the castle and priory. Everything is open and accommodation is often booked out. Easter pilgrims cross the Pilgrim’s Way at low tide, and wash their muddy feet at the edge of the causeway. Birdwatchers and photographers marvel at the big Northumbrian skies, the bird murmurations (spring and autumn) and the seals that lullaby you to sleep at night. Clever visitors stay overnight in island accommodation, so they can get the island all to themselves, when all the day visitors are forced to leave because of the tide – and they get to experience an eerily quiet Holy Island that most others don’t.

November to February are for you If you like a proper natural winter, with wild crashing North Sea waves and a sense of the wild. It is the time of year when Holy Island village huddles in on itself against the winds, and wood burning stoves are lit for warmth. There are still sunny periods sometimes and, as Christmas approaches, Holy Island takes on a magical air that is treasured by regular Christmas visitors (book well in advance if you’d like to spend Christmas on the island).

March and October are the ‘either way’ months, and can randomly decide to belong to any season.