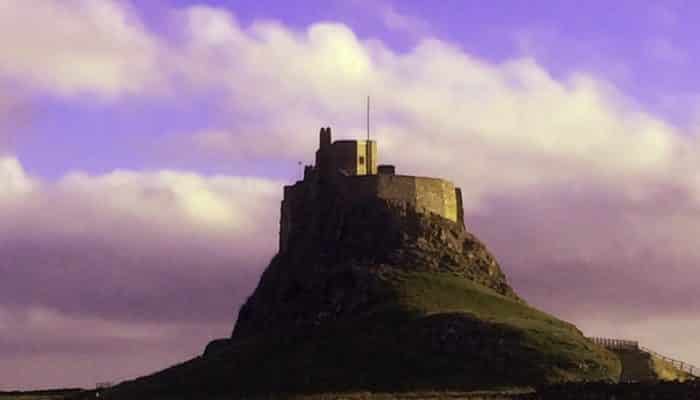 Our full guide to Lindisfarne Castle, in which we will cover: how to visit, opening times, cost of entry, parking, what can you see there, its quirky history and the adjacent walled garden designed by Gertrude Jekyll. We’ll also discuss weddings and dogs, as you do.

Covid-19: when will Lindisfarne Castle reopen?

The Castle is currently closed to visitors, because with the narrow corridors and stairways it is impossible to have an effective social distancing regime. This is kept under review, until it can reopen safely. There is not a firm date for this yet. For the latest information about reopening check the Castle’s Covid updates page.

You can still walk up to the castle. It is lovely to see it up close, wander around it, and take in the views towards the Farne islands.

Can I visit Lindisfarne Castle?

Yes you can, but it takes some careful planning (Which is part of the fun. Crossing Holy Island’s causeway is a great experience, as is visiting Holy Island itself). The castle is open mid-february to the end of October or the first week of November (exact dates vary, but the Castle is closed for winter). Opening times vary by day, depending on tide times. To plan your visit:

Can we drive to Lindisfarne Castle? Where should I park?

Unless you are a blue-badge holder, please park in the island’s main car park (Pay & Display), which you’ll see on your left, as soon as you arrive on the Island. The walk to the Castle from there takes about 15 minutes (through the village, past the harbor, and then you are at the Castle. You really can’t miss it). During the summer months there is a shuttle bus (£ small cost) from the car park to the Castle and back, which operates every 30 minutes when the tide is out. There are shuttle timetables displayed in the car park. If we have a link for the next season, we’ll add it here.

Visiting the Castle is free for members of the National trust. Unfortunately, your NT membership does not get you into the ruins of Lindisfarne Priory, which is managed by English Heritage (Yes, we’ll resist subjecting you to a rant about why these two noble institutions should honour each other’s memberships, but don’t tempt us….).

* Visitors from abroad will pay the price without Gift Aid (which is optional for UK taxpayers).

Entry to the Gertrude Jekyll Garden is free, whether or not you visit the Castle. More on that later.

Is there disabled access to the Castle? What about disabled parking?

There is a disabled car park about half a mile from the castle (closer than the main car park). To get there, drive past the main car park and then take the first left turn. The disabled and coach car park will be on your left a few houses down. There are also disabled toilet facilities in that car park. The National Trust says that disabled visitors with reduced mobility can be driven to the castle and dropped off there.

Access to the castle is  through a kissing gate and then you have to climb up a cobbled ramp that might be a little steep and slippery for some. There are three levels to the Castle, which are accessed through stone steps. Guide dogs are allowed into the castle. There are no disabled toilets in the castle itself. You can leave bags in free lockers next to the admissions hut. The Castle’s full access statement is available here.

Access to the Gertrude Jekyll Garden is through an unpaved path that can be muddy and uneven.

If you’re expecting a castle with fully dressed rooms and antique furniture, you may be surprised to learn that Lindisfarne Castle’s rooms are mostly bare at the moment. The furniture was taken away when the Castle underwent a major renovation in 2016-2018, and have not yet been returned. As we understand it, the building has to dry out first, and only then can the rooms be dressed. There are a few items, but these days the space is used for contemporary art exhibitions, and – like all contemporary art – they have their fans and detractors.

The building does have a great feeling about it, and the views of the harbour, village and Cheviot Hills from the Upper Battery are spectacular and well worth a visit.

Can you get married in Lindisfarne Castle?

The Castle can host a wedding celebration of upto 30 guests in the Upper Battery or the Ship Room. Organising a wedding on Holy Island is special, but requires some planning, especially if it is in summer, because accommodation on the island needs to be booked well in advance. Contact the Castle directly for more details and an information pack.

Are dogs allowed in the Castle?

Dogs are not allowed inside the Castle (except for guide dogs), but can be left at the ‘pet station’ near the admission hut.

Is there a Holy Island webcam showing Lindisfarne Castle?

We launched an experimental 24/7 webcam showing a wide angle of the castle. There’s not much to see at night, unless there’s a full moon (there’s no light pollution, so it’s very dark).

We set to a wide angle, so you can see bird murmuration in season, the migratory birds in autumn and spring, and Holy Island sunrises.

When was Lindisfarne Castle built? Can you tell me about its history?

There are lots of resources about the Castle, so we’ll give you the abridged version.

What is the Gertrude Jekyll Garden and can I visit it?

If we’d like to visit the Castle and stay overnight on Holy Island, where can we stay?

Glad you asked. With us of course! Belvue Guesthouse is on Holy Island itself and you can check availability and book instantly online. Then, when everyone leaves, you can stay. Come be our guest.